WPP founder and chief executive Sir Martin Sorrell has slammed Google and Facebook over their attempts to disassociate themselves from so-called ‘fake news’ appearing on their platforms. 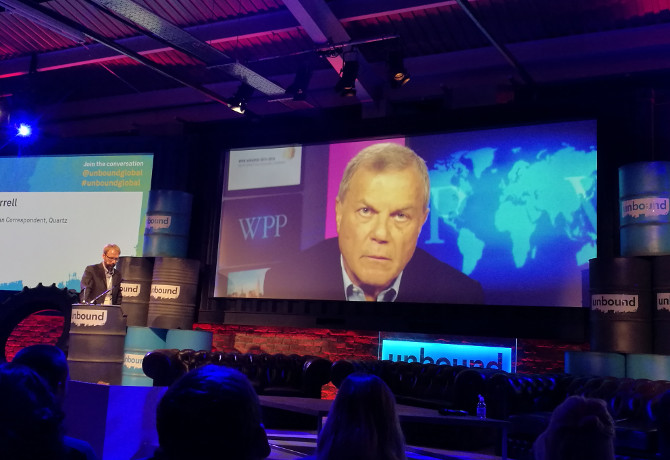 Speaking via video link at the unbound Digital event in London, Sorrell said it was “outrageous” that digital media giants are refusing to take responsibility for content being consumed by users on their platforms.

It follows a growing controversy around the role of Facebook and others in the US presidential election, with Sorrell pointing out that a story about Pope Francis endorsing Donald Trump was the most-read ‘fake’ news story published during the campaign.

Facebook founder Mark Zuckerberg has rebuffed the criticism, arguing it is a “pretty crazy idea” to suggest users were swayed by what they see on News Feeds. However, Sorrell argued that the issues of ‘fake news’ content, as well as measurement shortcomings, have raised “serious concerns” among WPP’s clients.

“This fracas has brought to everybody’s attention that Google, Facebook – and indeed Snapchat and Twitter – they masquerade as tech companies, but they are actually media companies,” said Sorrell.

“There is no way they can claim to be digital engineers tightening digital pipes […] and not be responsible for what goes through those pipes. It is outrageous that they try to disassociate themselves from what goes through.”

Despite the controversy, Sorrell confirmed that Google remains the largest beneficiary of WPP’s media investments – at around $5.5bn annually – while Facebook lies in third place. However, WPP spending on Facebook is up year-on-year from $1bn to $1.7bn, and the social network is expected to reach second spot by 2018, if not beforehand.

Despite the growing importance of digital to brand marketing strategies, Sorrell said that advertisers needed to strike a better “balance” in the investment split between traditional and new media.

“The suggestion television might die is totally misplaced. The same is true for newspapers,” he said, referring to data that the average reader of The Times newspaper spends upwards of half an hour engaging with the product.

“That has got to be more value to our clients than a three-second view on Facebook, even seven seconds when 50% of the time the sound it turned off. You can’t compare apples and oranges,” he said.

“New media will continue to develop. We’re over indexed, but not over-indexed enough. But, to get the balance right, we need to have better data.”

When asked about what the advertising industry will look like in 50 years’ time, Sorrell predicted that his company’s ‘horizontality’ strategy to spread skills and capabilities across agencies and business units will lead to a “one WPP” proposition for clients.