Unilever’s chief marketing and communications officer Keith Weed delivered the keynote session at this year’s Ad:Tech London event, advising delegates on how to manage change in the industry. 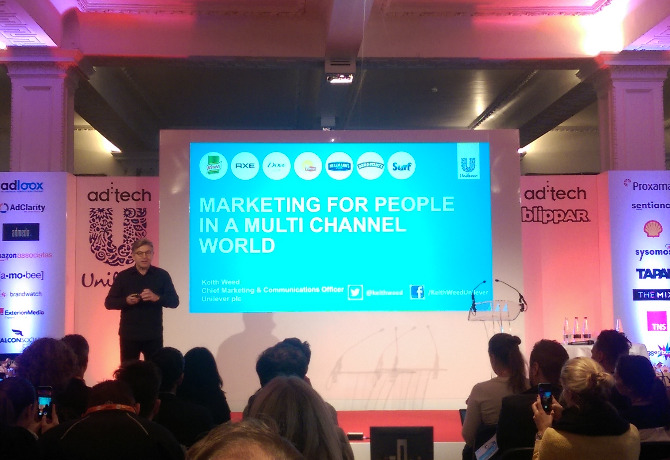 Weed’s three-step mantra is to “connect with authenticity”; to “engage with relevance”; and to innovate with talkability”.

Here are some of the highlights from his session:

It’s no longer enough to get noticed

“We’re all bombarded with so many ways to connect with each together, and in that complex and fragmented world, we can only spend our minute once. We want you to spend your minute with us, so it’s no longer good enough to get noticed,” said Weed. “Find ways to really connect people in a deeper way.”

“We have been inspired by VICE to connect with a millennial audience. We have just launched Broadly, and it has been a tremendously strong start. We are also learning a huge amount about creating content, and how we connect authentically with them, different to other target audiences,” he said.

“Too many people in business believe younger people, when they get a mortgage and kids, will start behaving exactly the same [as previous generations]. That is absolutely not true, and it is a real challenge.”

“Avoiding ads has been around forever. There is now also a real advantage to missing ads”

The ad blocking threat is real

“There has never been such an opportunity to avoid ads,” argued Weed. “Avoiding ads has been around forever, you just used to get up and leave the room. There is now also a real advantage to missing ads, with load speeds. There is utility in not having ads, if you’re paying for a data plan.

“That challenge for the industry, really taking on ad blocking, is something we’re going to be talking about a lot more.”

Machine-to-machine marketing is the future

“It is not that easy to predict the future, but there are some things we can predict,” said Weed, citing the explosive growth predicted in the number of connected devices – there will be as many as 50 billion globally by 2020, according to some estimates.

“The internet is very human to human through machines; now it’s going to be things talking to things. The challenge for marketers will not just be talking to you, but also your virtual personal assistant. We’re going to have to work out how our machines talk to your machines.

“AI is something we are leveraging, but it is going to be a massive challenge.”

“Jack Dorsey wants to accelerate to get true scale”

Reflecting on the appointment of Jack Dorsey as chief executive at Twitter, Weed – a keen tweeter and shareholder in Twitter – commented: “Personally I love Twitter. We talk a lot about the lack of scale of Twitter, comparing it to Facebook, but if you look at it by itself it has scale.

“Jack Dorsey wants to accelerate to get true scale. What is great is that is real-time, and the new Moments innovation is a really powerful step. They’ve got a challenge to scale to the next level, but Dorsey is ambitious to get there.”

Everyone needs to work on their personal ‘toolbox’

Weed, who had just returned from a two-day training course with Unilever’s senior management, argued strongly that everyone in the industry – no matter how old – has a responsibility to keep up with the latest technology, joking that he keeps in touch with his daughter through Snapchat.

“The world is shifting so fast, what we all need to do is keep up to date. We need to make sure that our toolboxes are full,” he said.

“There is always one person who says they are too busy to come to training. If you are too busy chopping down trees to pick up the axe, it is going to be a lot harder. Our senior people are the lost generation, my advice is to tool up.

“If you want to win the 100m, you can’t sit on your backside, eat chips and get up on the day and give it your best. You need to train,” he concluded.