What does the future hold for agencies? | M&M Global
Europe News
14th October 2015 by Anna Dobbie

Three chief executives from top agencies joined a debate on the afternoon of Ad:Tech 2015 day one talking about how chaos would impact their companies’ futures. 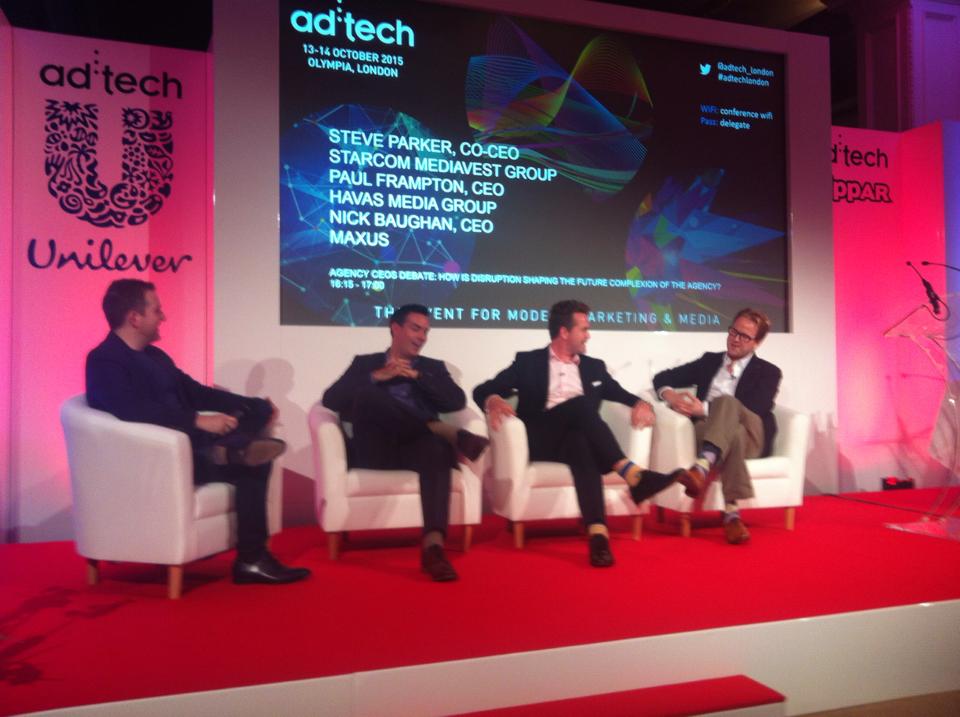 Summarising the state of the industry currently, Havas Media UK chief executive officer Paul Frampton said “in one year, we’ve probably seen the progress that we’ve seen in the last three to five years”, focussing on a meteoric rise in programmatic and mobile.

He discussed the increase in platformisation, comparing it to the film industry with social media acting like cinemas and hosting content. He also talked about the evidence to support that people don’t like intrusive advertising, with it leading to a decrease in trust. “We need to think how to serve people better,” he said.

Starcom chief executive Steve Parker talked about the impact of behavioural change. “This has always been a business that moves quickly and it’s always trying to understand the consumers and recognise the pace at which things are changing and evolving.”

“It’s about understanding that you have to bring a different playlist to the party in order to deliver objectives to clients.”

Maxus chief executive Nick Baughan said that a bit of chaos was fun but “something I spend a lot of time telling my children is that ‘it’s always fun until someone starts crying’”.

“While it’s an awful lot of fun forming the most vibrant part of the metamedia industry, as we reach towards this promised land, we have to make sure we’re not leaving people behind,” he added.

Parker felt the key was understanding people as humans and consumers, and diversifying. “We need to bring consistency and simplicity, or else you will have chaos, and that is something as leaders we are always striving for,” he added.

“However, the complexity that we have now doesn’t make it any less fun.” Frampton said that confusion and chaos is the reason that agencies exist.

The value of consultants

Parker felt that consultants can “add a tremendous amount of value to an agency when they are being proper consultants” but not when they are stepping on agency toes, which he described as “surface, disingenuous and not expert”.

“For us the great CMOs have become agent provocateurs in their business,” Parker said, “More and more we are seeing CMOs as a force for good and change, which is great for agencies.”

Frampton felt that when CMOs are given aggressive growth targets, they look round the room and see people who can help which is how agencies add value “in a world of fragmentation”.

“All want growth and many want change,” he said, “each client, each brand is very very different.

“They want to be brave but they’re not sure how brave they can be.”

Other hot topics included the ways in which agencies should work with start ups, on which they all had differing views, the pros and cons of ad blockers and new recruiting developments for finding talent.