YouTuber Anna Johnson led the video platform’s IAB UK Upfront session at its new building at London’s Kings Cross, emphasising the ways the channel had helped her achieve her goals. 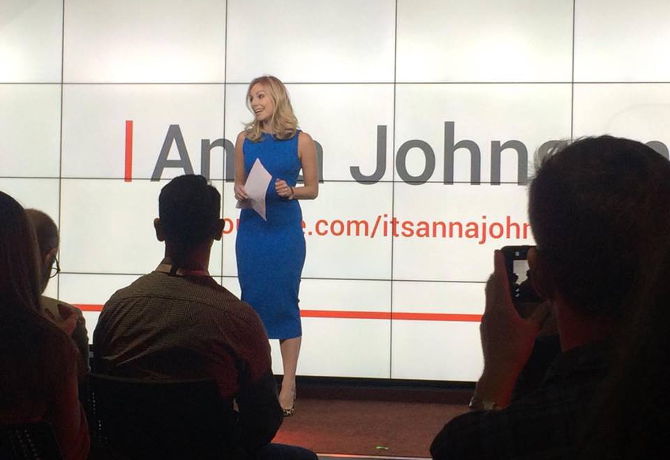 Johnson, who had tried her luck at getting into media through several methods including joining a girl band, found a global audience through her parody songs, one of which has been watched by almost nine million people worldwide.

“It has opened doors for me which were very much shut before YouTube,” she added.

Google agency director of branding Pete Cory discussed how the producers of ‘The Late Late Show’ were talking about their digital strategy first, as their YouTube ratings exceed their TV views.

YouTube is the most popular means of consuming content for 16- to 24 year-olds, with larger screens such as televisions the fastest growing platform on which to watch YouTube content – despite the big screen depicting a mobile playing videos from the platform.

Cory pointed out that 96% of viewers keep their sound on, in direct contrast to Facebook’s current auto play video settings.

Viewers watch YouTube for 40 minutes on average, implying the audience watch through the adverts. Cory also discussed how, across 56 campaigns in Europe, 76% delivered higher ROI on YouTube than on TV.

However, Cory concluded that YouTube was still receiving less than half the investment required to reach maximum ROI.

Google head of brand solutions Alison Lomax showed a short film she had starred in with Julian Barratt in the days before YouTube, discussing how it could have found a much wider audience if it had been released now.

Lomax discussed her three passion points – investing in ecosystem of storytellers, Google Preferred’s premium content plus a slate of new packages responding to behaviours unique to YouTube with the aim of offering greater targeting opportunities and moments like the Olympics of Christmas.

Google director of branding David Black concluded the session by speaking to Cancer Research UK director of digital Michael Doherty about the recent initiative to raise money for charitable programme Stand Up To Cancer through a 1000-hour YouTube broadcast featuring several popular influencers.